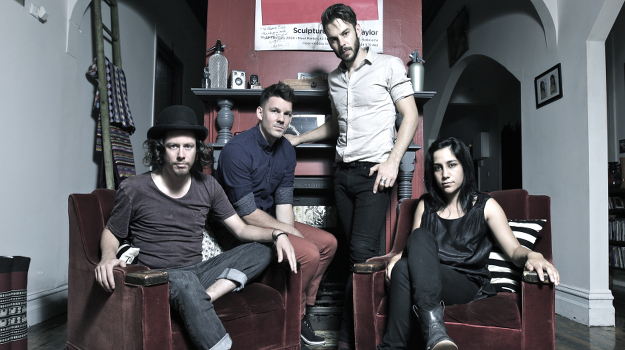 As so often happens, a chance meeting, a random jam, results in something far more than just the forging of a new friendship. So it happened for Nick Milwright and Damian Cazaly, who after a fortuitous encounter in 2005, came to form Melbourne group Blackchords.

Their resulting brand of darkly majestic pop has grown organically over the past seven years, as has their audience and acclaim, the band releasing their eponymous debut in 2009, touring Europe, garnering praise and award nominations both here and abroad. It’s music that creeps and cavorts, it drags you in and flings you out, it’s primal and new all at once, it’s something different, something to think about indeed.

The group – who now boast the talents of bass player Tristan Courtney and drummer Manny Bourakis – pieced together their second long-player, which sees the band evolving and exploring, crawling out of the primordial ooze, growing legs and walking, running, towards the next stage in their growth and musical expansion.

The result is A Thin Line, which,while retaining the darker, introspective soul of Blackchords, draws from a broader, sometimes chimerical, soundscape, drawing on instruments, vintage pedals and electronic programming loops previously unused by the band.