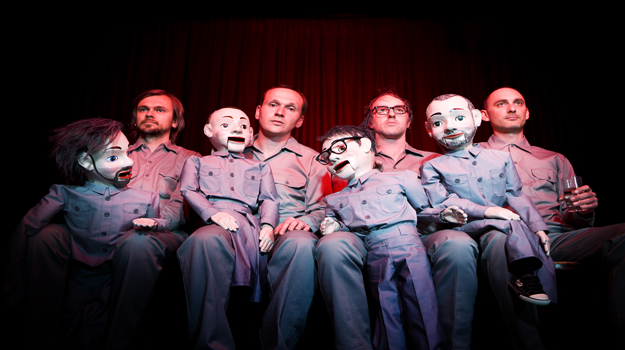 Imagine that Fujiya & Miyagi are mask-wearing technicians dissecting music, keen to magnify particles of sound to create a pulsing antidote to the ordinary. They speak in tongues, using language as a rhythm, picking words that sound good, rhyming ‘jigsaws’ with ‘carnivores’.

In total, Fujiya & Miyagi don’t really sound like anything. Instead, they sound like everything condensed into perfectly arranged three-minute chunks of infectious pop music, a strange hybrid of James Brown on Valium and Wire gone pop. Or maybe Serge Gainsbourg with a PhD in electronics backed by David Byrne’s Eno-produced scratchy guitar mixed by MF Doom. It’s Darwinism gone mad.

Formed in 2000 as an electronic duo of David Best (guitars and vocals) and Steve Lewis (synths, beats, programming), they released Electro Karaoke In The Negative Style two years later, a minimal electronic set it hangs eerily on Best’s distinctive whispered vocal. Adding bass player Matt Hainsby in 2004, they released a series of ten inch EPs that took them to the hearts of fanzineland. Gathered together these parables of personal injury, both physical and mental, made up three quarters of the well-received (Pitchfork, NME, MOJO, etc) album Transparent Things in 2006.

The release of their third album, Lightbulbs, in 2008 saw the addition of Lee Adams (drums) to their live line-up, and this fuller sound then translated into the deeper, darker rhythms of their latest release, Ventriloquizzing (2011), which hit the CMJ Top Ten on the day of its release.

Electro Karoake In The Negative Style