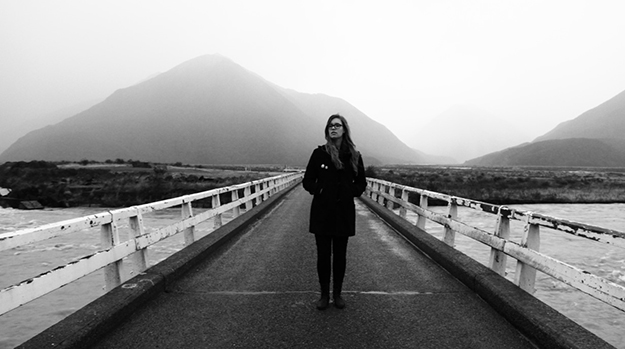 As the wind across the harbor rears within moments from a soft caress to a brutal howl, so too does the music of Luckless, the ever-evolving musical project spearheaded by songwriter Ivy Rossiter.

Luckless’s sound is as elusive as smoke but as enveloping as smog.  Definitions hover slightly out of reach while layers of guitar-wail and drum-thunder echo around the edges.  Luckless draws inspiration from 90’s heroes PJ Harvey, Mark Lanegan and Sparklehorse, while reaching out to contemporary touchstones The Kills and Warpaint; the music is poised somewhere between the ethereal haze of indie folk and the propulsive drive of alt-rock.  Not since Fur Patrol’s Julia Deans has New Zealand had as compelling a frontwoman; a guitar slinging, caterwauling explosion as capable of entrancing as eviscerating an audience.

2014’s sophomore album “Vindication Blues” builds on their 2012 self-titled debut, with a record of great emotional breadth and musical scope.  Two years of touring throughout New Zealand honed Rossiter’s songs to be brought to fruition at the Sitting Room in Lyttelton, with the aid of co-producer and engineer Ben Edwards.

“beautifully controlled, almost sculpted music… but that’s only one side of Luckless, and Rossiter’s other mode is more defiant than defeated,,. atmospheric and dynamic, and perfectly suited to songs I’d describe as lusty and lyrical, but hardly Luckless.”  – Nick Bollinger, Radio New Zealand

“An essential statement from an artist who hasn’t so much grown as exploded, and this album is much recommended… Say hello-and-wave-goodbye to another great talent from this country? Hope so, she deserves “a global platform” (as they say).”  – Graham Reid, Elsewhere

9/10 – “this record is as defiant as it is fatalistic; as vulnerable as it is fierce; and as beautiful as it is rugged” – Cheeseontoast.co.nz

“Mining a reflective and sombre vein similar to that walked by the likes of Anna Calvi, Beth Gibbons (of Portishead) or even Rebekah Del Rio, the songs captured by Luckless alternate between weightless and deeply submerged”. – Martyn Pepperell, Rip It Up

WATCH Luckless When You Asked Her To Stay

When You Asked Her To Stay