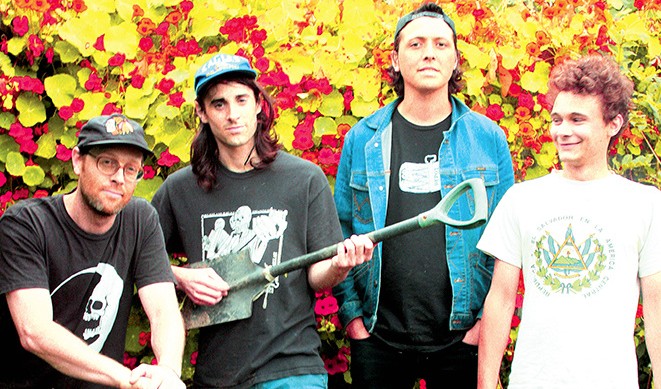 New Zealand psychgazers Surf City return with an album of sticky summer jams and fuzzy swirls and out and out dream pop blasts. Harnessing the explorations of 2013’s We Knew It Was Not Going To Be Like This into more focused packages, the group still delivers reverb-soaked joy at every turn. Adding in a return to their earlier efforts in crafting the perfect jittery motorik pop song, Jekyll Island finds the band at the height of their powers.

Centered around singer/guitarist Davin Stoddard’s wry observations and sing song delivery, the record sees Jamie Kennedy increasingly pick up a guitar as well and add a welcome dimension of sunken melodies and lock step fuzz at all of the right moments. Mike Ellis and Andy Frost hold things together with a constant driving beat and rhythm that proves undeniable. Following a wander around the globe landing Stoddard in the U.S., Mexico, India and South Korea, the band finally find themselves reunited back home and ready to blast out their unique blend of Flying Nunesque hooky pop smarts, Yo La Tengo loopy psych travels, Neu! krautrock, and a never-ending infectious layer of sun-drenched fuzz.

Jekyll Island is Surf City’s third album and it is out now. Following successful runs through the U.S. and Australia, 2015 will see Surf City’s first ever European tour.

On the back of some scintillating Australian shows, Surf City’s album ‘Kudos’ is the esteemd RRR’s album of the week!

The debut album from New Zealand’s Surf City is a dynamic collection of guitar rock and pop music, filled with well crafted, memorable hooks. The band’s distinctive music is influenced by New Zealand’s rich post-punk past, and informed by an all-encompassing love of post-punk and lo-fi garage sounds.

“New Zealand’s Surf City are getting such big buzz that the hype has made its way halfway around the world.” New York’s Oh My Rockness

New Zealand’s Surf City returns to Australia to support the release of their debut album Kudos (out on Popfrenzy on September 3rd).

Three years in the making Kudos features eleven tracks filled with warm, fuzzed up and frenetic guitar pop. It’s a sound pioneered by fellow Kiwi bands like The Clean and The Bats in the early 1980’s, but Surf City have moved the sound forward into the new millennium.

The album was recorded and mixed by the band themselves over the last year and a half mostly in bedrooms, basements and various studios.

Having already shared the stage with Interpol, MGMT, Dinosaur Jr, Battles as well as playing at the Big Day Out and Laneway Festival, Surf City are back in Australia better and louder than ever.

Surf City’s debut album Kudos is out on September 3rd.

We New It Was Not Going To Be Like This