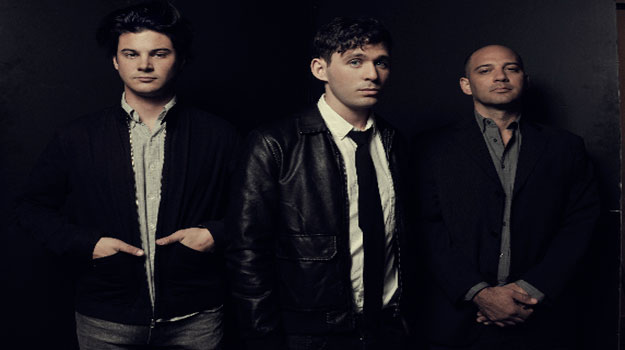 “It’s a record about moving forward,” says Peter Silberman. “Hospice was kind of all-encompassing for a while and Burst Apart feels like us moving on from it. Not to abandon it, but to keep it in its place and figure out what’s next.”

Recording began in September 2010 and then continued over a five-month span at the Brooklyn-based band’s studio in Bushwick. Rather than bring in an outside collaborator, singer/guitarist Peter Silberman, drummer Michael Lerner, and keyboardist/multi-instrumentalist Darby Cicci decided to pool their considerable skills and produce the record entirely on their own.

Two years spent touring behind Hospice had left its mark on The Antlers. In addition to bonding the trio as friends and colleagues, all three had developed an increased interest in electronic music, what Silberman refers to as “music that keeps moving and is kind of entrancing and expansive at the same time. Headphone music, music that keeps you going while you’re driving for 20 hours.” The band’s goal was to draw upon those sounds while still employing classic songwriting structures, synthesizing ostensibly artificial qualities into an organic pop template to evoke a full panoply of feeling.

“A lot of electronic music prides itself on its anti-human quality,” says Cicci, “where it chooses to pull emotion out rather than add emotion in. In that way, this record is definitely way far from being an electronic record.”

To that end, The Antlers avoided excessive programming, instead endeavoring to capture the symbiotic sound of a band that simply happens to employ synthesizers and other electronic instrumentation.

Though Silberman had previously released two solo works under the moniker of The Antlers, 2009’s Hospice represented the full-length debut of the trio as it currently stands. An elaborate song cycle dealing with life, death, and all the in-between, the album earned rapturous praise while also striking a deep chord in a generation of listeners. But in crafting its follow-up, The Antlers were anxious to avoid being branded by their previous album’s mournful content.

Where Hospice was marked by its fixed narrative structure, Burst Apart is decidedly more elliptical and less lyrically baroque, in part to allow Silberman’s plaintive vocals to coalesce as but another element of the overall aural picture. He describes the album as simply “a collection of songs,” noting that “even though they all belong together and they’re all related, there wasn’t a kind of unifying concept.” None of which is to say Burst Apart is without cohesive thematic content.

Imbued with seductive guitars, taut rhythms, and hypnagogic melodies, Burst Apart is simultaneously introspective and animated. “Parentheses” is constructed upon clattering beats and vertiginous dub tension, highlighted by Silberman’s keening falsetto, while “Every Night My Teeth Are Falling Out” soars and swings, its joyous pop sensibility belying an undercurrent of Cronenbergian angst. In the end, the album arrives at a devastating and definitive crescendo with the stunning soul throwback, “Putting The Dog To Sleep.”

“I think that song really encapsulates what we were doing with this record,” Lerner says. “Soul music has a real purity, an honesty, a gut-wrenching quality.”

While The Antlers’ ardent passion for musical exploration resonates throughout the album, it expertly sustains a careful balance between the cerebral and the visceral. Epic in aspiration yet intimate at its core, Burst Apart is an astonishingly affective collection that offers an exhilarating glimpse into The Antlers’ incandescent heart.

“I think people will be sucked in,” Cicci says. “We want to draw people into the world of the record.”

WATCH The Antlers Every Night My Teeth Are Falling Out