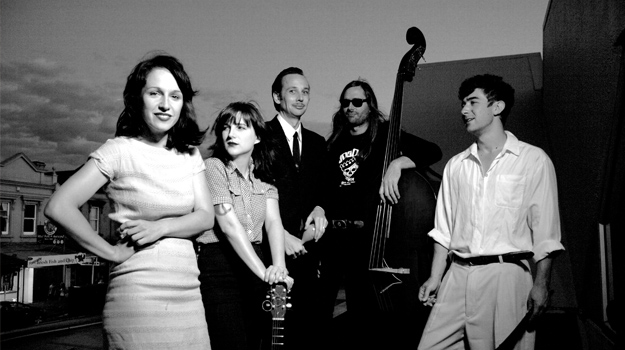 The Drab Doo-Riffs are an unlikely 5 piece that beamed into central Auckland slightly over a year ago and have been unchaining people’s buns ever since with their p’twanging guitar, boom-schmacking drums, and basically-scream-your-head-off vocals. Members Lucy Stewart (Sleepless Nights, Vietnam War), Mikey Sperring (Don Julio, Street Chant), Karl Steven (Supergroove), Caoimhe Macfehin, and M.F. Joyce (Boxcar Guitars, Demiwhores) play a carbonated toxic cocktail of surf-punk-blues type stuff that they describe as “sort of like rock and roll, only faster”.

Their debut EP Bury Me In Drab has been transporting listeners to the twilight zone of dance since it’s release in October 09 and you could fry eggs on the bonnet of their live shows. If you were at a party on the Starship Enterprise on its way to crash Bo Diddley’s beach hop you would probably be listening to The Drab Doo-Riffs!

Bury Me In Drab